How to set deadlines on tasks and templates

Creating a due date on a task or template

Written by Janet Jones
Updated over a week ago

With many processes there are cases where a deadline or timescale is necessary. There are two different ways to set this up in Process Bliss:

At the template stage

When you create a template, you are able to set an amount of time in which the activity should be done, once it has been created as a task. For example, on the template you can set the overall due date for all tasks created from it to be 3 weeks after the task has been started.

In the example below, if I create a Billing task on the 1st September, the due date will automatically be set as the 21st September.

On template steps there are three due date options: 'after task is started', 'before task is due' and 'after step'.

'Before task is due' lets you set the due date in relation to when the task itself is due. You may want to use this for steps towards the end of the process, or if you like to 'work backwards' to work out the due dates.

'After step' lets you define the due date as being a certain amount of time after another step. For example, you could make the step 'File invoices' due 3 days after the step 'Approve invoices'. This is great for when steps should have consistent deadlines or where there are SLAs (service level agreements). 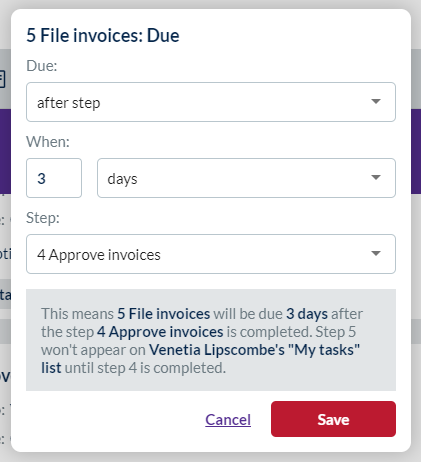 When tasks are created from templates with timescales on, dates are generated according to the rules set. However, the dates can be edited if needed.

At the task stage

On a task you can set exact due dates, or on steps you can also use the 'after step' due date feature on templates.

If a task or any of its steps have due dates set, this will cause notifications to be sent out to the task or step assignee when the task is approaching its due date and when it is overdue. Read more about notifications here.

Setting a start date on a task means that it won't appear in the task list for any user until that date has been reached. These tasks can be found by selecting the "Waiting" option in the status filter.

Did this answer your question?